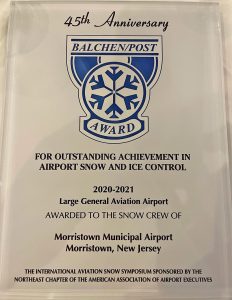 Morristown Airport (MMU) has been named a winner of the 2020-2021 Balchen/Post Award, a national accolade for outstanding achievement in airport snow and ice removal. The prestigious annual award is presented by the Northeast Chapter of the American Association of Airport Executives (NEC/AAAE) and is awarded to airports in different categories based on their size, type and amount of annual operations.

“This winter season proved to be one of the most difficult seasons in recent history with close to 50 inches of snowfall, in addition to the challenges posed by the COVID-19 pandemic,” said one MMU tenant.

“However, from the beginning of the season, DM AIRPORTS, LTD. provided a clear outline of their snow removal plan and ensured a clear line of communication throughout the entire season.”

The MMU Snow Team battled over 49.6 inches of snow this past season, with most of that occurring over a 3 week period in late January and February. Which included a 30+ inch snow event from January 31-February 2nd. This was all done while trying to manage a COVID-19 pandemic response and ensuring that staff were kept safe and available for snow events.

The criteria for the Balchen/Post award include an airport’s preparedness for the Winter season, effectiveness of their snow and ice control plan, communication during and after an event/storm and post storm activity.

Excelling in all facets listed above, MMU was named the winner in the “Large General Aviation” category, recognizing airports with 50,000 or more total operations annually.

“The team at MMU does a great job of keeping the runways and airport surface in good condition during snow events,” one MMU Operator said. “They also have a good system of communication between airport operations and the flight and de-ice crews. They really make a difficult process as easy as possible.”

This marks the third time Morristown Airport has won the Balchen/Post award, as the airport was previously honored in the 2013/2014 and 1986/1987 Winter seasons. 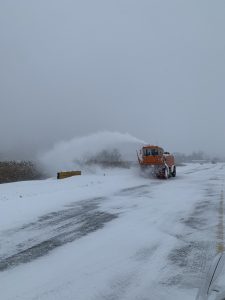 To learn more about the Balchen/Post award visit the AAAE site.